I thought since another year is over and all that I'd review the year for my favourite manis and such! This might be a bit of a long, picture heavy post I'm afraid! I did consider splitting it into categories - stamping, nail art, swatches etc, but then I thought I'd do it chronologically so that I could see how I've improved and progressed over the year. Hopefully...

January started with the new 31 day challenge. I didn't blog much of it, due to technological issues (my laptop hated me for a lot of the first half of the year), but I did document it over on Instagram. Here are my picks from January!

February, my birthday month, and March, which saw me dip into Crumpet's Nail Tarts tri-polish challenge, which is having a revamp for the new year. I'm going to make an effort to join in more often and not forget!

March was also when I got my first Cheeky plates and fell in love with China Glaze Keep Calm, Paint On. I had to sneak in this neon gradient too, with one of the British high street polishes of the year, L'Oreal Confetti.


April and May were quiet. My technological issues were over but I had nub issues and my blogging mojo was lacking.


My nubs were at their naughtiest (and shortest) in June and July, but it didn't stop me developing a love of summer brights and skittles.

It was now that I got my grubby little paws on a bottle of lush pink Duri Rejuvacote. I've spoken at length about this product, and quite frankly I'm evangelical about it. It's sorted my nails out once and for all (I hope!) And you can tell almost straight away from August onwards that my nails were happier. For more info on Duri and what it's done for me, have a look at this post that I dedicated to it and all it's wondrous qualities.

September saw the start of the Crumpet's Nail Tarts 33 day challenge, which beside a few reviews and the odd Sunday Stamping offering, took up the majority of the next ten weeks and produced some of my best (and poorest) nail art.

October and November, and on the nails grew...and on went the challenge...


What does December mean when you're a nail art enthusiast? Chrimbo nails of course! It also meant my nails were long and strong enough to be shaped into almonds, something I thought 'd never achieve!


So, there we have it, my favourite manis of the year, and I hope you can see progression! I think I can - my photographs are better for the most part, and my nails and cuticles are neater, thanks to better clean up and solar oil! I think I'm most proud of the length I've nursed them to - from sad little nubs to long strong talons in 4ish months.

It's funny how you associate things that happened or what you were doing when you were wearing a certain thing, with polish and clothing. I have to say, 2013 has been rather cruel to me and my family, and everytime something bad happened I can remember exactly what was on my nails. But I can remember the good too, including working with some lovely people (including Kerrie from Quirk and the ever lovely Debbie Crumpet), none of which would have been possible without nail polish. I love this little community!

This week's AiS theme had to be New Year nails really, didn't it! I decided to go against the firework/party inspired nails since I will be doing neither, and instead went for a special polish, something sparkly and a bit of bling! My special polish is Butter London Fiddlesticks, the only Butter London in my fast approaching 900 polish stash, and it's a pretty sparkly deep pink. I accented it with Barry M Black Multi Glitter and stamped with Pueen 29 in Konad Black Pearl and Barry M Silver Foil. The stamping itself brought with it a new challenge - stamping linear patterns on long nails is something I'll need to practice! And I even had to double stamp a couple of nails (can you tell which ones?) The rhinestone bows were popped into the topcoat and secured with another dab of topcoat either side. I say secured, but I've already had to rescue one from my hair and stick it back on... I don't think these are actually going to last me until New Years! 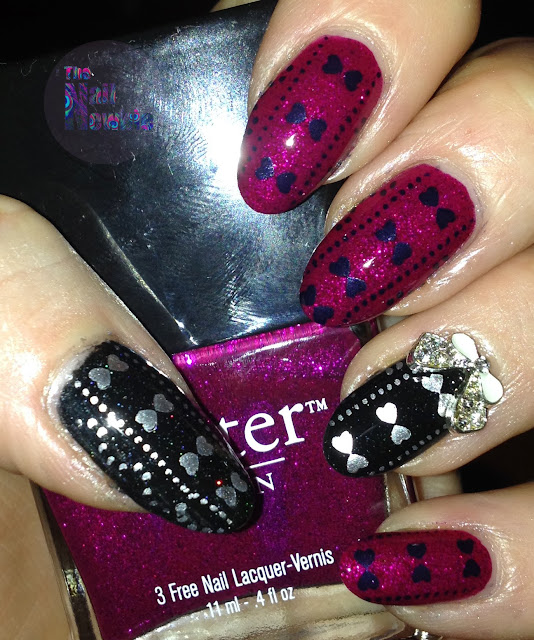 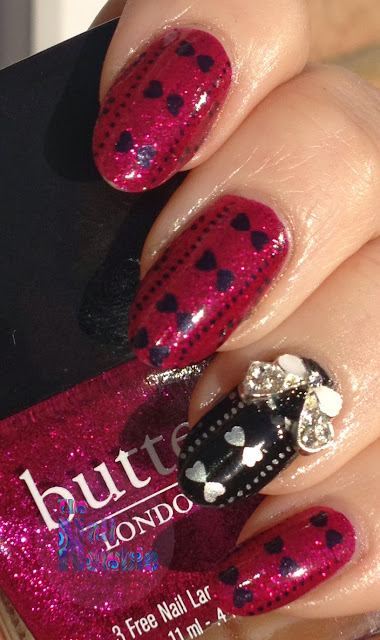 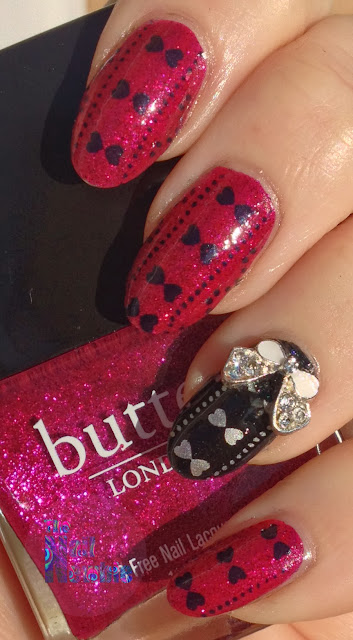 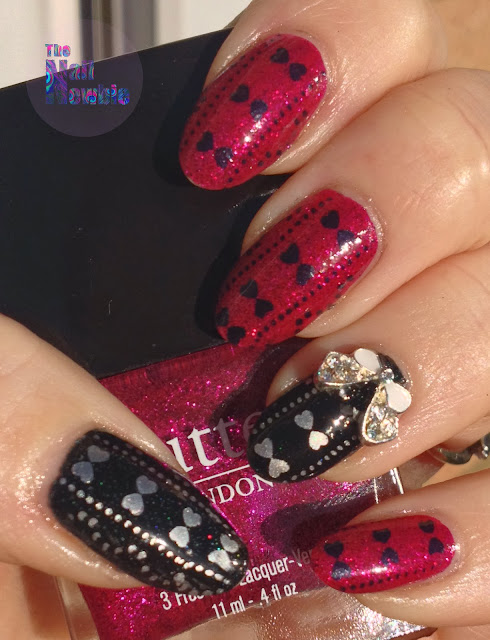 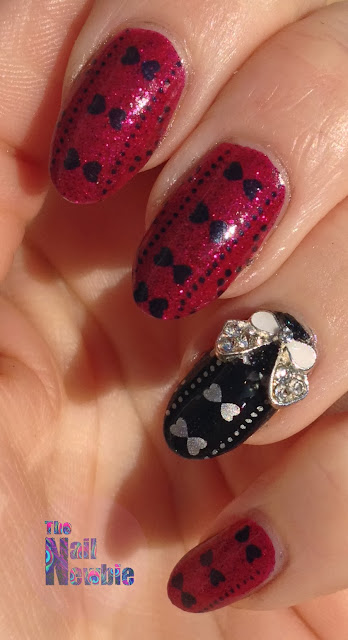 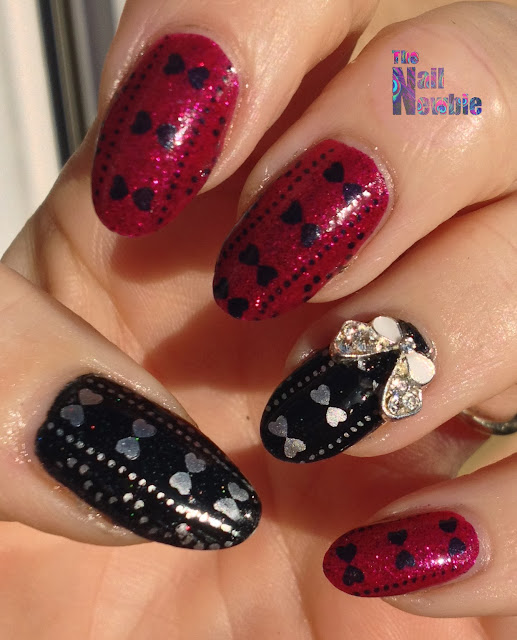 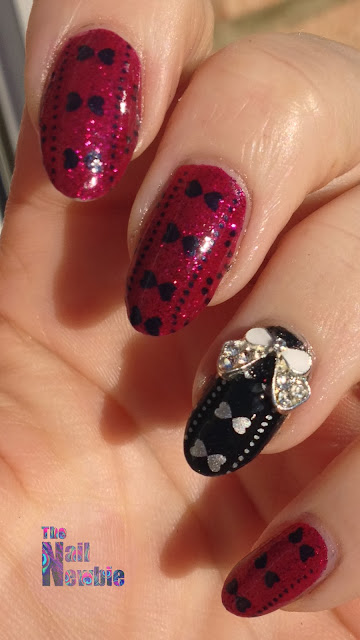 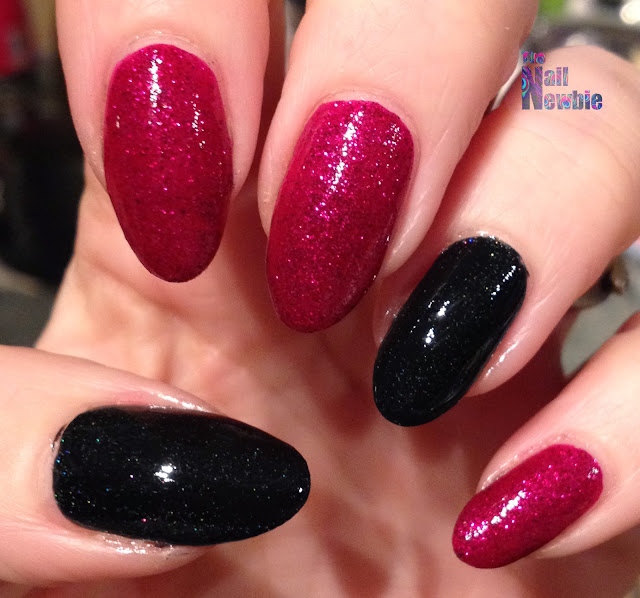 I've had a little blogging break for a few days, and it's been nice but I'll be back in force soon with a couple of new challenges!

Merry Christmas from me!

Just a quick post tonight to show you my Christmas nails and wish you all a very Merry Christmas before the Baileys takes over! I can't take credit for the idea - I got it from Copycat Claws - and I also didn't get a good picture before the dinner prep ruined them, but my boys loved them! The base is two coats of Maybelline Color Show Knitted Gold from the brocades limited editions, super pretty polish so grab it while you can.

I hope you all got your Christmas wishes, I did - Christmas with my family and it was perfect x

Off Topic Tuesday - The Christmas Tag

I saw this tag in one of my Facebook beauty groups and thought it would be fun for Christmas Eve's off topic Tuesday! So here it is, the Christmas Tag. 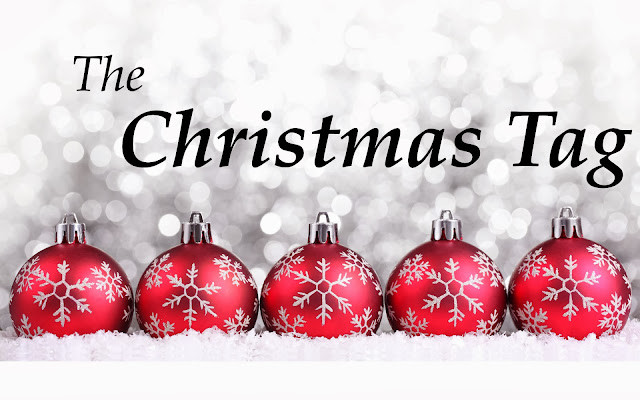 1. Favourite Christmas song?
It's hard to chose! Probably The Pogues Fairytale of New York, closely followed by Have Yourself a Merry Little Christmas and Santa Baby.
2. Favourite festive drink?
Can't beat a drop of Bucks Fizz for Christmas morning breakfast! It's all downhill from there...
3. Favourite Christmas film?
I'm not a huge movie person, but one of my faves as a child was The Santa Clause. My two are a little bit too young still for proper Christmas movies, but I've got them The Grinch on DVD as they love the book.
4. What is at the top of your Christmas wish-list this year?
I honestly just wanted to spend Christmas with my boys, and it was a close call but my wish was granted and I'm so grateful.
5. Favourite festive make up or nail art look?
Um, bring on the GLITTAH! Seriously, glitter, glitter everywhere and not a drop to drink!
6. Favourite outfit at Christmas time? (LBD? Christmas jumper? PJs?)
Something comfy but smart. Probably a sparkly top with my comfiest stretchy jeans for the big day!
7. Would you rather play outside in the snow or sit inside in the warmth with a cuppa?
Snow is fun for a day or two, but any more than that I'm longing for spring!
8. Wrapping presents – love or loathe?
Indifferent. I don't mind it, and I'm actually pretty good at it (blowing my own trumpet there, sorry!) But I usually do it all in one go and sitting on the hard floor getting a numb bum and feeling chilly isn't my idea of a good time!
9. Favourite Christmassy food?
You can't beat a leftover sandwich! Turkey, stuffing and cranberry sauce between two thick, soft slices of bread! I also love making bubble and squeak with leftover veg, topped with a runny poached egg. I'm all about the leftovers apparently!
10. What is your favourite thing about Christmas?
My children have made it for me this year. Their excited little faces, cute Christmas songs and crafts have just been magical. I love them so much and after a tough couple of months, Christmas is all about them this year.
Hx
Pin It
Posted by Unknown at 08:00 0 comments

It's been a while since I partook in a Sunday stamping challenge, but this week's theme was Merry Christmas so how could I not? I went for a classic green, gold and red look, and really loved it! I got to use a couple of untrieds that I'd been hoarding for a while, and while I loved one I hated the other. The gold foil is Nails Inc Chelsea Bridge Road and I bloody hated it. It dragged, it was lumpy, brush-strokey and it chipped really quickly too. And it didn't even stamp. Good job I was covering it with glitter because it was a hot mess under there! The glitter itself was a joy - China Glaze Party Hearty, a long time lemming which I grabbed earlier in the year ready for Christmas! Just one coat gave the coverage you see, and disguised the yukky Nails Inc. The green is another China Glaze, Jolly Holly and it was stamped with Barry M Gold Foil and Pueen 38. 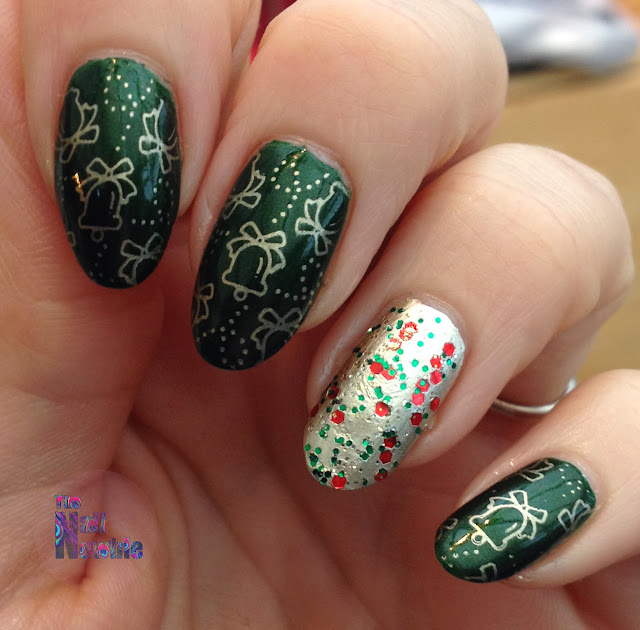 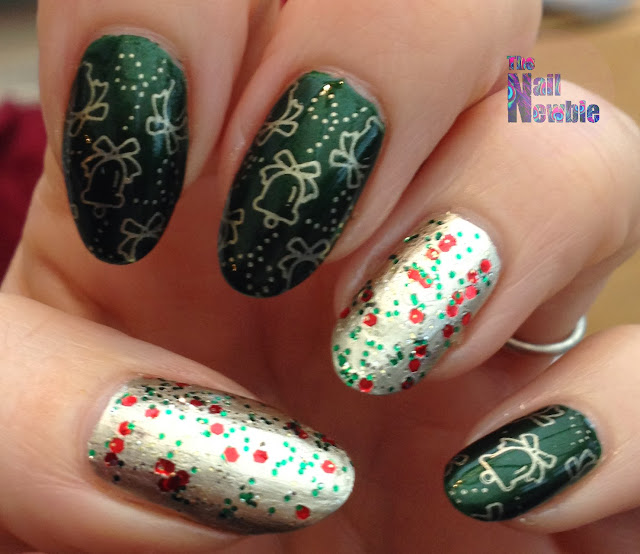 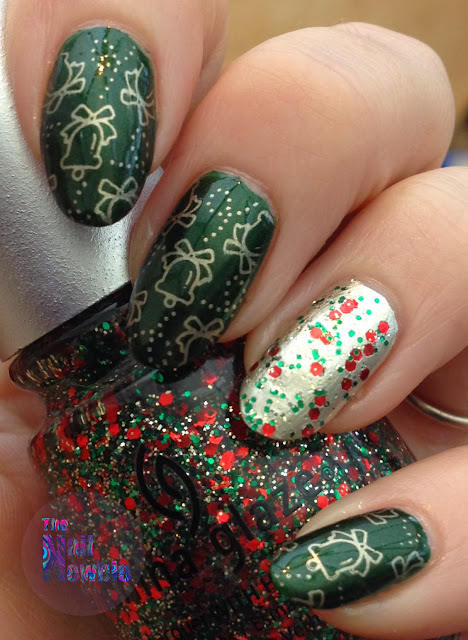 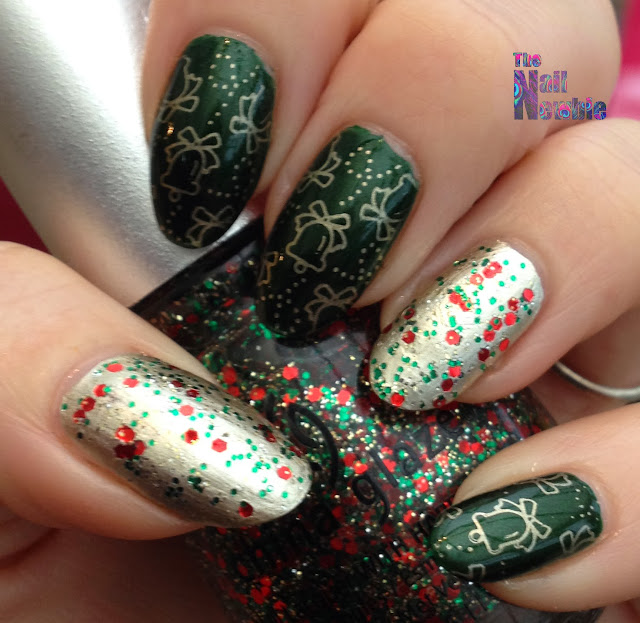 If you've been a reader for a while, you will know I have a thing for birds and feathers, especially owls and peacocks. So when the mood struck for matte flakies and silver stamping I rolled with it and came up with some festive owls! Sticking with the bird theme I used Orly Fowl Play as my base, then amped up the flakie level with a coat of Finger Paints Motley. I stamped the cute owl from Pueen 40 in Barry M Silver Foil and once it was dry (with the aid of Poshe - does anyone find flakies take forever and a day to dry?) I mattefied the whole thing. The accent finger was Maybelline Foil Flash (from the Colour Show Brocades collection). As well as taking ages to dry, I find flakies have a tendency to shrink - there's a teeny bit of shrinkage here unfortunately. Still loved it though. I know it's not strictly a Christmas image, but I do think the colour combo looked quite festive. 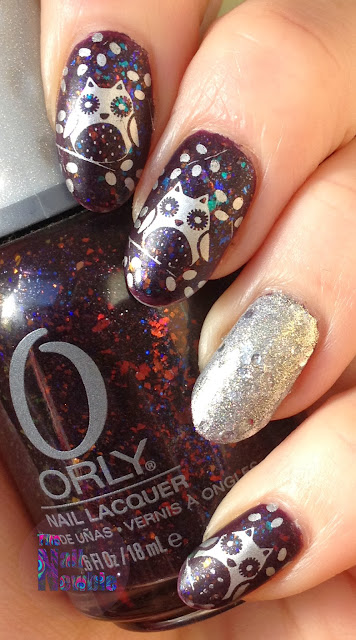 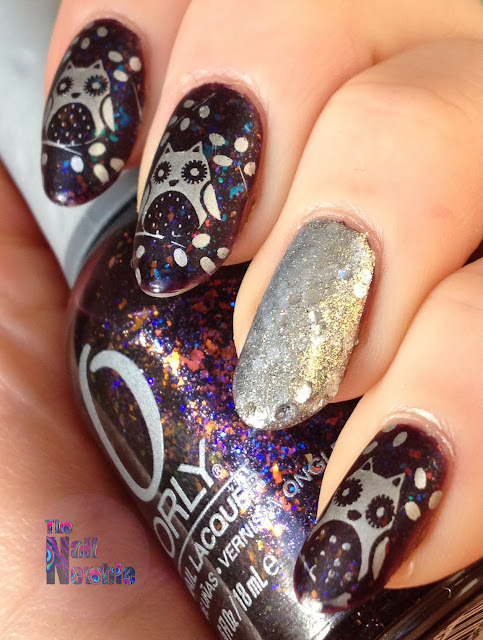 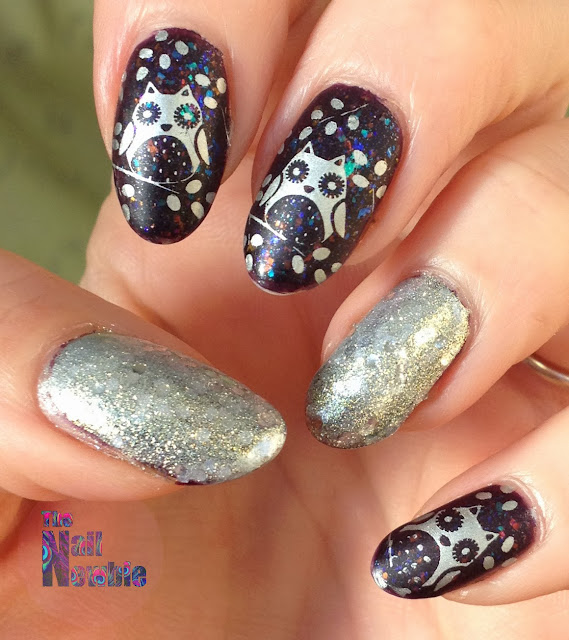 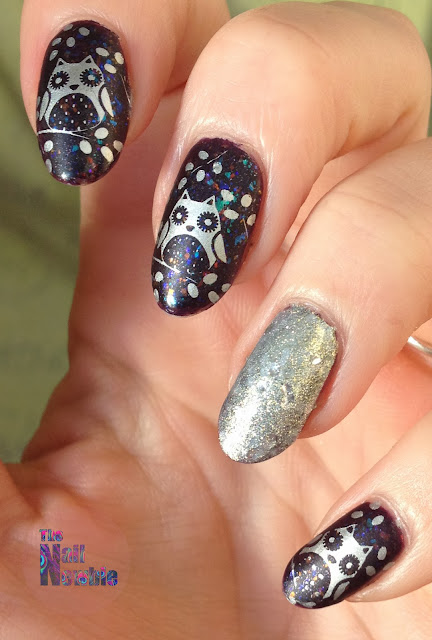 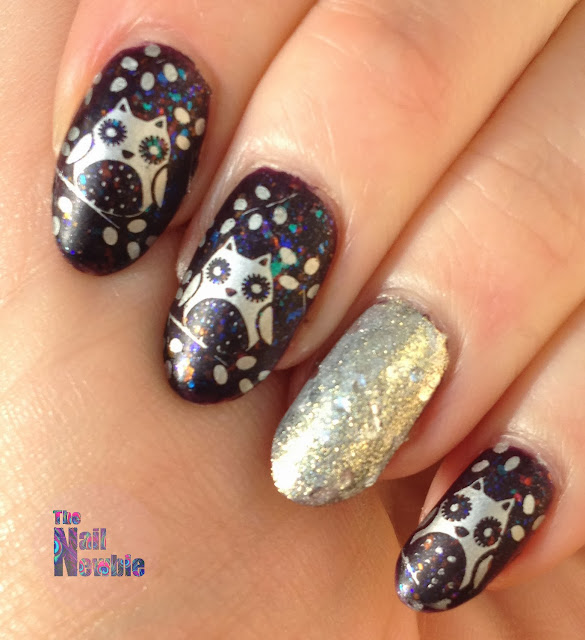 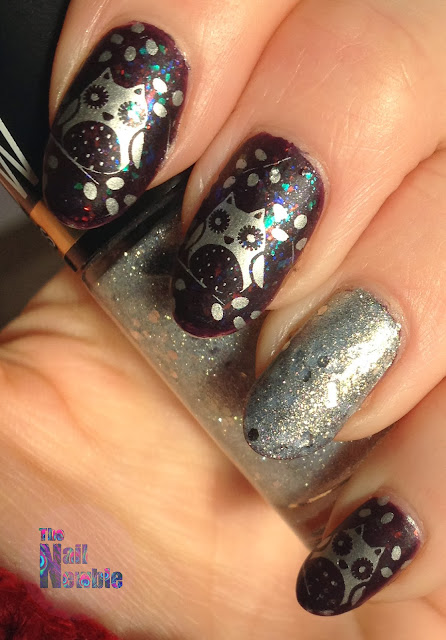 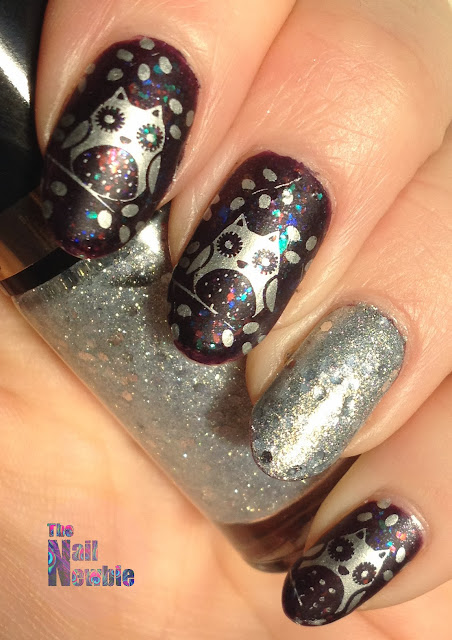 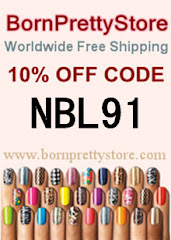 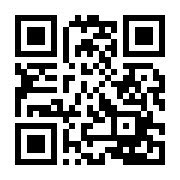